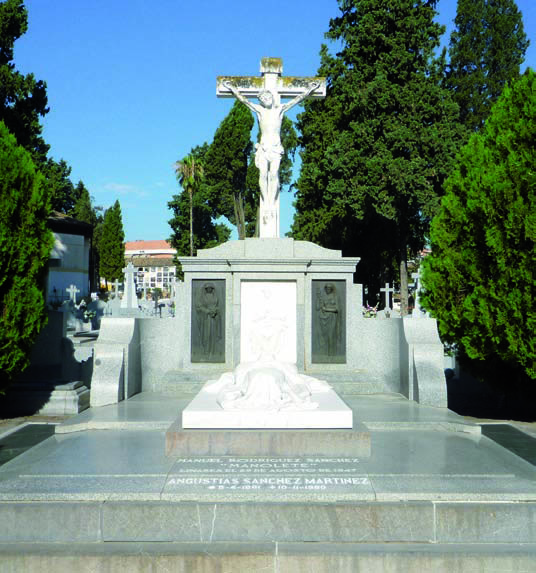 Manuel Rodríguez Sánchez (1917-1947),“Manolete”, considered the fourth “Califa “ has probably been the greatest legend of bullfighting in Spain, not only for his style in the ring, austere, elegant, and his art with the muleta, but for his untimely death that shocked the whole of Spain and that even today remains in memories and debates. Son of a bullfighter, he soon felt the call of the arena. In 1929 he began to fight bull calves. The Civil War slowed down his career as he was called up. He took on Seville on July 2, 1939, and the same in Madrid in October. Since then, his career developed upwards and upwards but, like other maestros, he was not free from criticism. His performances in Mexico were also highly discussed. On the afternoon of August 28, 1947 he fought his last bullfight in Linares (Jaén). When trying to kill the bull he was gored by the bull called “Islero” in the right thigh, which caused him heavy bleeding and ended his life, although there is doubt about whether it was a blood transfusion that speeded up his death. A large crowd received his remains in Cordoba. The Government awarded him the Grand Cross of Charity. His attorney Joseph Flores Gonzalez, “Camera”, also lies in this cemetery. Also part of his legend, the love he had with Lupe Sino, a relationship that was cut short by his early death. The pantheon, made in 1951 by Amadeo Ruiz Ortiz, is one of the most ambitious in the cemetery.