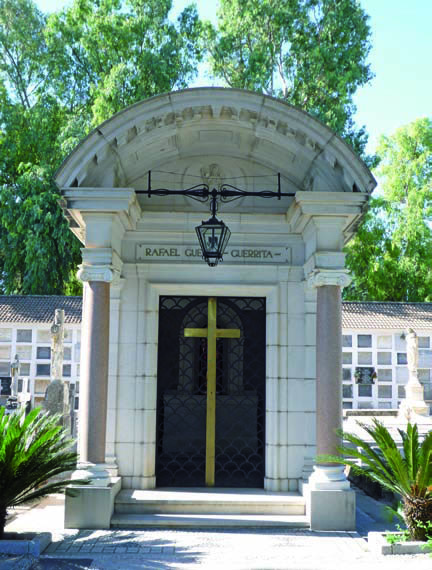 Rafael Guerra Bejarano, “Guerrita” (1862-1941), was the second caliph of the great saga of the Cordoba bullfighters. In his rich personality he was primarily known for being a great fighter, by promoting the Cordoba “Guerrita Club “ for his well-known phrases and for organizing, from the club, some of the most original bullfighting events that took place in Spain: the fights with young bulls in tribute to the women of Cordoba, a show attended mostly by women, whose inauguration took place in 1898. For a long time this was presided by Guerrita himself. As a bullfighter his maestro was “Lagartijo” whom he took over from in 1887. He retired in 1899. He killed 2338 bulls. He was also a banderillo. His famous phrases, more or less modified by the passing of time, were some such as “there are people for everything”, “each one is a he is”, “What cannot be cannot be and, moreover, it is impossible.” The “ Guerrita Club”, dissolved with the death of the bullfighter, it was a landmark in the city and which was echoed in other parts of Spain. A place where there was talk of bulls and where the presence of the maestro, and his sentences, became something like an expected ritual.