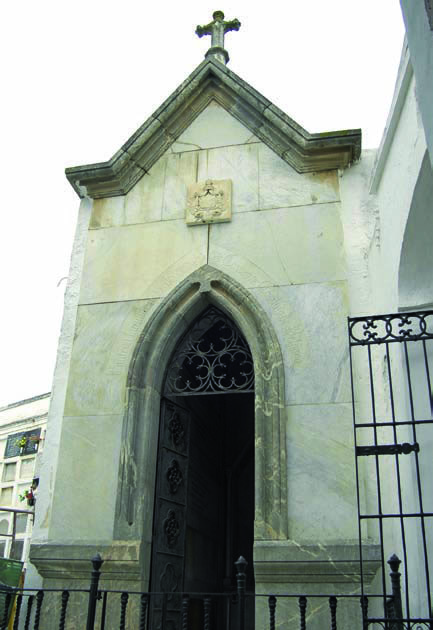 The pantheon of the Counts of Casillas de Velasco is the first example of aristocratic mausoleums in the cemetery of Health that the visitor sees on entering. It is a sober memorial, with a certain Gothic feeling, which can be seen in the writings showing that the pantheon belongs to the counts. There is also a pointed arch made of dark material, which is highlighted by the clear marble background. The peerage was created in 1814. There is a lot of military representation in the pantheon, and although there is no inscription, there are the remains of Jose Olivares Ortega (1827 - 1901), Earl spouse, married to Maria Josefa Ruiz del Burgo y Basabrú in 1873, which made him President of the Circle of Friendship (1876 and 1883-1884), military governor of Cordoba and Lieutenant General. He received the Crosses of San Hermenegildo, Isabel la Catolica and Military Merit as well as the Cross of San Fernando and the Medal of Africa. He was also elected senator for Cordoba in 1877 and 1879, but then had difficulties in accepting his election. The family had property in Montoro and in the capital. José Olivares Ortega died in Seville and his remains were moved to this pantheon in 1927.