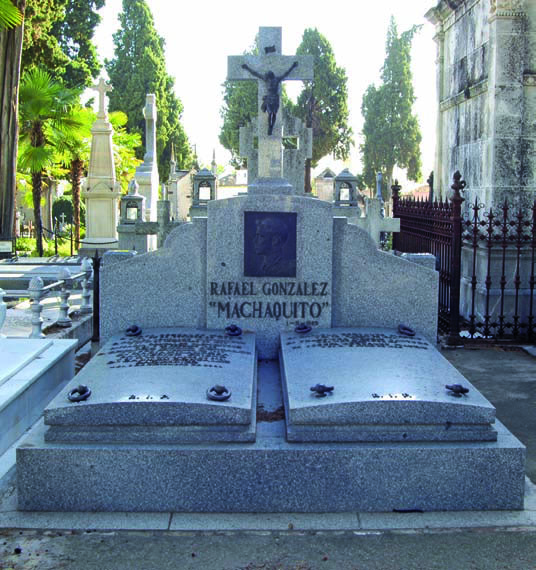 Rafael González Madrid (1880-1955), “Machaquito”lacked the finesse of other “Califas,” although in time his technique improved, but he was a torero of great will and he was extraordinary efficient when entering to kill. His main competitor was “Bombita”, who he took over on September 16, 1900. On May 9, 1907 in Madrid, he killed a bull in a masterly way and the columnist “Don Modesto” asked the sculptor Mariano Benlliure to immortalise the moment and that’s where the sculpture “ The afternoon sword Thrust “ comes from. In 1910 the newspaper “ Los Toros” chose him as the best matador of the time after a survey involving 49,120 people. He retired in 1913. He killed 2155 bulls. In the tomb you can see a bronze portrait of the bullfighter, which was also made by Mariano Benlliure, whose inscription reads “To Rafael González Madrid, from his friend M. Benlliure, 12/1/1908. “ He was friends wit Benito Perez Galdos. He received the Charity Cross for his performance in 1902 in Hinojosa del Duque (Córdoba), where a part of the ring collapsed causing the spectators to fall into the ring, with the obvious danger that the bull could cause, then Machaquito went towards the bull and killed it one great thrust, therefore preventing a possible tragedy.