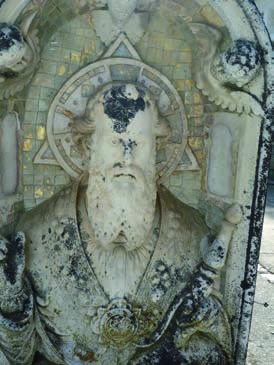 Victoriano Chicote Recio was a professor at the School of Arts and Crafts (Modelling and Casting and Artistic Metalwork) and Director during the republican era. The School of Arts and Crafts in Cordoba, an institution that has formed a respectable amount of artists and professionals, has its antecedent in the School of Fine Arts founded in 1866. In 1901 the School of Industrial Arts was created, which later gave way to Arts and Crafts. Professor Chicote Recio was also, among others, Academic of the Royal Academy of Science, Fine Arts and Noble Arts of Cordoba. What stands out more in this grave is the image of God the Father eternal and powerful. The right hand is raised in blessing, while the left holds a sceptre that is based on the world and shows the power of God. Above the head there is the image of a dove representing the Holy Spirit. On either side there are two cherubs. The background is composed of tiles with gold highlights. It is likely that the sculpture is the work of Recio Chicote himself. In this sepulchre we can also find Félix Hernández Giménez, architect, archaeologist, Arabic expert, Doctor Honoris Causa by the Universities of Berlin and Granada and of the Royal Academy of Cordoba. He worked at the archaeological site of Medina Azahara and the Mosque of Cordoba and in other parts of Spain. It can be said that this pantheon bears a remarkable dimension of art and culture that invites us to seek the track of those who lie here.