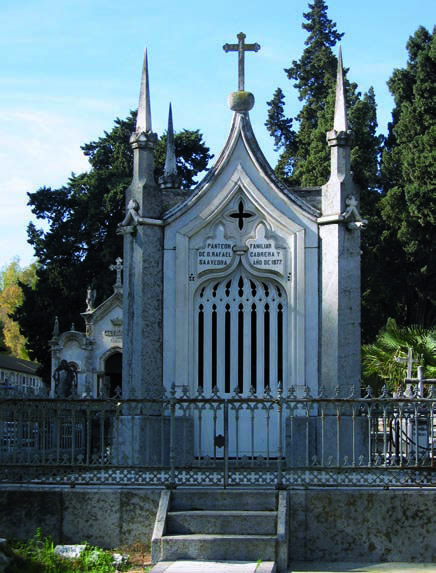 The Pantheon, dated 1877, and whose founder was Rafael Cabrera Pérez de Saavedra, is an example of the funerary architecture of the late nineteenth century characterized by a return to models of earlier times, in this case a Neo-gothic pantheon where the main elements of this style can be seen clearly in the skew arch and front door, consisting of stylised lattice arches, in the pinnacles, in the gargoyles and the verticality of the whole monument. There are also the powerful buttresses in the corners. At the top of the façade and the posterior part, and on one of the sides we can see the Cabrera shield, one of the oldest surnames in Cordoba that continued after the conquest of the city by Ferdinand III. On this shield, composed of several quarters, the author of The House of Cabrera in Cordoba, -published in 1779 -, Francisco Ruano, tells us that it is made up of “The headquarters of the Varonía de Cabrera, placed in the middle, or abyss two black goats in a field of gold, and on the edges by the patronymic Enriquez, golden castles in red fields, and alternating black crosses of Calatrava in fields of silver “ Ruano’s description corresponds remarkably well to the shields in this pantheon.