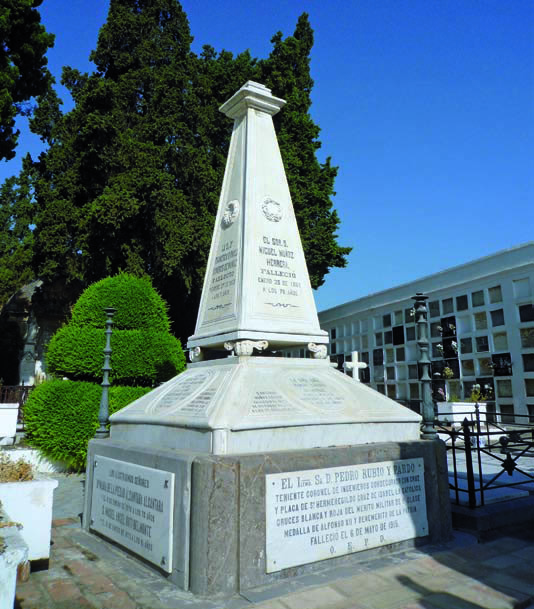 This original monumental style pantheon, by F. Barrado, was initially built on a foundation. On top of this we have a torso-pyramidal shape in white marble with the inscriptions that tell us about those who have died. The second pyramid is on top of the first, tall and slender, finished at the top with overlapping flat shapes. It has well-crafted colours and volumes. They are also remarkable lion claws, a symbol of power and nobility, on which the most vertical pyramid stands. In the pantheon we can find, along with other deceased, Miguel Angel Orti Belmonte (1891-1973), who served in Cordoba as the City Archivist-Librarian, Director of the Normal School of Education and Chairman of the Provincial Commission of Monuments. In Cáceres, where he lived for over thirty years, he was Professor of History and Director of the School of Education, Director of the Provincial Museum, Secretary to the Commission of Monuments and Chronicler. Doctor of Philosophy, he became a Fellow of the Royal Academy of Cordoba (1953) and in his acceptance speech read the work “The Jurisdiction of Cordoba and social classes in the city”. Moors and Jews in the middle Ages. He was also a Correspondent Member of the Royal Academy of History and Fine Arts of San Fernando. Great Cross of Alfonso X the Wise. He managed to rescue the Treasures of Aliseda, a set of jewellery of Syrian-Phoenician influence that was finally taken to the National Archaeological Museum. He wrote, amongst other works, Cordoba during the War of Independence, Los Ovando and Solís de Cáceres ... etc.