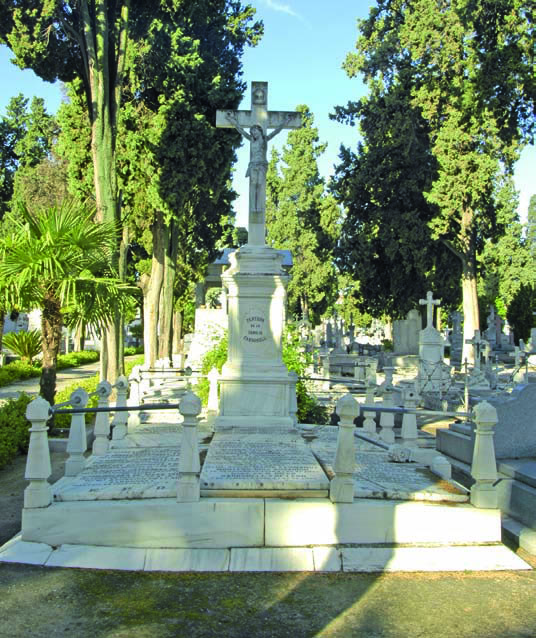 Antonio Carbonell y Llacer (1827-1878), born in Alcoy and died in Cordoba, was the founder of one of the most famous companies in the city: La Casa Carbonell. Born into a family of industrialists and business men, he originally dedicated his business in his hometown, businesses like trading, manufacturing of cloth, financial activities and others. He got married in 1851 to Candida Morand Bordehore, from Denia, daughter of a family of bankers. In 1866 he won the auction of the collection of contributions from Cordoba and Murcia and, consequently, moved to Cordoba in 1867. From this point the company gradually specialises in the olive oil trade. Despite its remarkable dynamism, at this early stage the company suffered liquidity problems. When the founder dies it has a deficit of over one million reales, it was saved from bankruptcy by the contribution of the assets of Candida Morand. On his deathbed Carbonell y Llacer, in a gesture of honesty, pronounced the sentence “Carlos, pay everybody.” However, the arrival of one of his sons, Carlos Carbonell y Morand to the board, produced a strong period of expansion for the family business.

Carlos Carbonell y Morand (1856-1917) was one of the most important businessmen that the city of Cordoba has known. In 1878, after the death of his father, Antonio Carbonell y Llacer, he took over the family business redirecting part of it to exporting olive oil in the international market. In the late nineteenth century Spanish oils began to have a quality that would make them, in the early twentieth century, able to compete with those produced by the Italians and French. In this respect, the work of Carlos Carbonell y Morand led in large measure to the increase in Andalusia oil quality. To do this, from 1899, he promoted the Health Fair, and from his position as newly elected president of the Chamber of Commerce and Industry of Cordoba, an olive oil exhibition which in 1904 became a Regional Exposition. Between the nineteenth and twentieth centuries the Carbonell House achieved a great position in the exportation of Spanish olive oil. Carlos Carbonell also, from the Chamber of Commerce, promoted activities such as the construction of the Guadalmellato damn, among others. In the golden jubilee of the company the Diario of Cordoba newspaper (2/7/1916) spoke of the leaders of the house as “men who work with Saxon tenacity” in fact, the family motto was formed by the words “Union”, “Providence” and “Work.”